News » Who are the 25 ‘coolest’ athletes of all time? “According to GQ”

The folks at GQ give us that opportunity with their very cool list of the 25 Coolest Athletes of All Time. Here’s their list, in alphabetical order, and our comments. If you think someone is missing or wrongly snubbed add your candidate in the comments section. 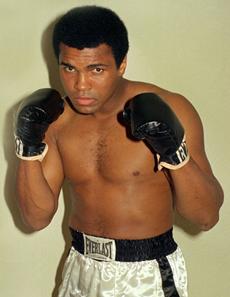 Muhammad Ali: No debate here. The “Float like a butterfly, sting like a bee” line alone qualifies him.

Mario Andretti: Anytime that name is spoken, don’t you hear a “Vrooom!” blast past in the background?

Arthur Ashe: Other guys hit the ball harder, but no one ever played tennis with more dignity and grace.

George Best: His talents and erratic lifestyle combined to make him the Mickey Mantle of soccer, where he was one of the first celebrity athletes. And the Irish still offer this to-the-point description of his greatness: Maradona good, Pelé better, George Best.”

Bjorn Borg: He wasn’t exactly the master of one-liners, but the headband and scraggly beard were a hip look back in the ’70s. And he’s kept up to date, with his line of undies.

Jim Brown: For nine years he was the baddest man in football. Then he went to Hollywood and shared the screen with Raquel Welch. Sweet.

Julius Erving: Dr. J still sets the record as the nickname that causes the most excitement with the fewest letters.

Walt Frazier: If Denzel Washington had ever decided to do a biopic of an NBA player, Clyde is who he would have played.

Bob Gibson: If you don’t think the fiercest knockdown artist of MLB’s modern era was cool you can be the one to tell him.

Bo Jackson: The bad hip didn’t keep him from being hep. And “Bo knows” remains one of the great ad campaigns.

Michael Jordan: The tongue wag. His Airness. Two threepeats. He was Elvis in hightops.

Jean-Claude Killy: No matter how mad French people make us, all date-hunting men have to admit they’d kill to have that accent.

Evel Knievel: Is it cool to repeatedly break every bone in one’s body? To earn a spot on this list Evel needed to land in one piece more often.

Tim Lincecum: America’s most popular pothead may have bogarted his way onto this list a little early in his career

Pete Maravich: Pistol Pete was so artistic with a basketball he made two generations of sportswriters look up the spelling on Baryshnikov.

Joe Namath: His Super Bowl guarantee was so cool that we’re willing to overlook that thing with Suzy Kolber.

Arnold Palmer: He’s the only man in U.S. history who got to have his own army without going to boot camp.

Pelé: His bicycle kick might be the coolest signature move of anyone on this list. Plus, he was also our first one-named star in sports.

Gary Player: He was the only cool thing about South Africa during the apartheid years, and he remains the only Masters champion who took his Green Jacket home with him, for keeps.

Derek Sanderson: Probably the weakest choice on the list. He was partners with Namath in the ill-fated Bachelors III bar, but his excesses ultimately left the hockey great penniless.

Kelly Slater: Yeah, I had to Google him too, to find out he’s the Big Kahuna of surfing.

Ken Stabler: The Snake was very cool back in the day, but he’s looking a little homeless in some of his recent photos.

Ted Turner: Is anyone in a yachting cap cool? Only if they owned the Braves and squired Jane Fonda for a few years.